To date, eight musical comedies have been written, produced, and thoroughly enjoyed by audiences throughout the nation. All of the plays are based on Martin and Nelson’s books, especially their best seller, Growing Up Lutheran.

The first play, Church Basement Ladies, opened September 8, 2005 at the Plymouth Playhouse (in Plymouth, MN, a suburb of Minneapolis) and closed March 2, 2008. Since then it has been touring nationally. A week after the first show closed, the sequel, Church Basement Ladies 2: A Second Helping, opened at the same theater running through October 2009. True to form, the third play, Away in the Basement, with a church basement Christmas setting, opened a week later at the Playhouse and ran through the holiday season closing at the end of January 2010. It was repeated at the Plymouth Playhouse during the 2010 holiday season. The fourth show, A Mighty Fortress is Our Basement, opened in August of 2011 and ran through September of 2012.  The Last (Potluck) Supper, the fifth in the series, began in 2013, with the sixth musical, Rise Up O’ Men, wrapping up a 10-year Church Basement Ladies musical run at the Plymouth Playhouse in 2017.  With the opening of You Smell Barn in 2018, performances were moved to the Ames Center in Burnsville, which is currently hosting 2019’s Christmas show, Hark! The Basement Ladies Sing, which ends January 10, 2020. The first seven shows have been on a national tour throughout the years. 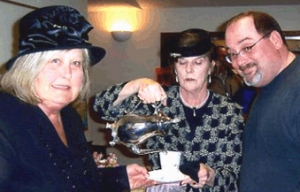 In February 2005, the first play in the Church Basement Ladies Series opened at the Reif Center in Grand Rapids, MN. After the Saturday evening production, a veryLutheran Opening Night Party — sponsored by the local Thrivent branch, “Those Lutheran Ladies”, and Reif Center — was held at St. Andrew’s Lutheran Church in Grand Rapids, Minnesota.

“Those Lutheran Ladies,” Janet Martin and Suzann Nelson (holding coffee pot), and Director/Producer Curt Wollan. All of these plays are smash hits. Reviews can be found by “Googling” the play titles, and snippets of these shows from different theatres throughout the nation can be found on YouTube.